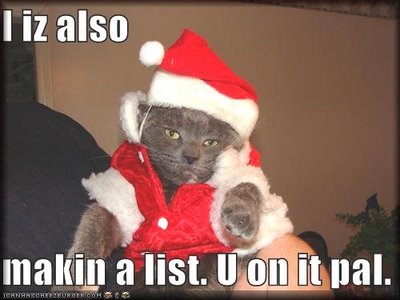 It all starts with a talking cat…

What?  You didn’t know cats could talk? Neither did I.  Every day, my father talks about how he and the family cat, “will be HAVING a talk on Christmas Eve,” about the cats bad behavior.  My first thought was simple; the old man has lost his mind.  Perhaps he has been spending too much time on lolcats.com.  After a bit of research it seems he was right.  There actually is a tradition where dumb animals are granted the power of speech for one hour at midnight on Christmas Eve.  Whooda ‘thunk it?

This thought of the infamous’ talking cat’ got me to think of strange Christmas traditions and mythology that people do not normally think about.  Of course the thought soon made me realize that today is the LAST Sunday before Christmas.  In turn this inspired me to write a very special Steve Scott Sunday Selection Christmas Post. Of course I do this with a little fear, for I know that a “very special” episode of ANYTHING can mean that you have “jumped the shark”.

So, onward I forge, with this very special Steve Scott Christmas Post.

It was all the fault of a talking cat.

Besides the taking animals there are many traditions for Christmas.  Some are commonly practed these days.  Others are not.

Christmas Wreaths:  Wreaths, garlands and ‘boughs of holly’ are an ancient tradition for Christmas.  All of these evergreens remained alive during the cold winter nights, and even bore some fruits and some berries.  Ancient pagans brought these plants into their homes because they believed these plants had some magical protection that could assist them in battling the evil spirits of winter.

Christmas Trees: Ancient Druids decorated evergreen trees as part of their celebrations.  In the 8th Century, St.  Boniface is said to have chopped down an oak and had an evergreen sprout in its place.  This was the beginning of a dual Christian and Pagan traditions of decorating the tree.  In the 19th century this tradition began to spread and Martin Luther is claimed to have been one of the first to have done a tree for personal devotion.  -Rather than being decorated for a town or village.-

To ensure a happy life together a couple should have the following decorations on their Christmas tree: 1)      It was “lucky” to decorate the home with evergreens.  Mistletoe was especially lucky because it kept evil spirits away

2)      Throwing any Holly in the fire brings bad luck

3)      Each of the Twelve days of Christmas represents what the weather will be like for a corresponding month of the year.

4)      Letting a hearth fire go out on Christmas is bad luck for the year.

6)      Christmas Pudding Charms.  Often some charms would be mixed into the Christmas pudding.  These charms could represent fortunes for the coming year.  Whoever received the charms would get to keep them and they would represent their fortunes for the coming year.  Some common charms were:  A coin (Prosperity), Thimble (industry), Ring (romance), Clover (luck).

Though Christmas myths like talking cats and mistletoe warding off evil spirits MUST be true, it is possible some myths are not.  Here are a few posts that possibly put a damper on some Christmas myths.

4 Myths Debunked:   Some good ones here.  Was Santa thin?  Did Coca-Cola Create Christmas?  Is a Christmas Tree Pagan?  Are poinsettias poisonous?

Physics of Santa Claus: No reason to wonder if St. Nick exists, let’s do the math.

Mr. Potter, Hero of Bedford Falls:  “It’s a Wonderful Life” has always been my favorite Christmas Movie.  It even ranks highly (if not on top) of my list of all time favorite movies.  After reading this post and applying solid business principles I realize how wrong I have been.  Mr. Potter is not bad at all.  It is that miscreant George Bailey who must be stopped.

Debunking the Christmas Debunkers:  Some people simply never want to believe.  To combat this Lesley gives us a Christmas post that shows all the reasons why Santa really does exist.

‘Twas the Night Before Christmas

One of the biggest influences on “modern” Christmas and Santa Claus was the 1823 poem, “A Visit from St.  Nicholas” which was later renamed “The night before Christmas”.  The exact origin of the author is in dispute.  Most people accredit this poem to Clement Clarke Moore, but a few scholars claim it was Henry Livingstone Jr.

It is really a moot point, regardless of author this poem is not only infectious but very fun and easy to parody.  Here are a few of the best –or worst- versions of this Christmas classic.

A Visit from St. Nicholas (The original ) Of course before you go and read any of the great parodies of the Christmas Classic, check out the original work.

‘Twas the Month Before Christmas:  In a Christmas Season filled with ever increasing amount of commercialism this poem seems to hit on the modern version of the holiday.  The only complaint is that with way the start of Christmas sales keeps slipping to the right, perhaps this should be The TWO months before Christmas. Politically Correct Night before Christmas:  “Second-hand smoke from his pipe had his workers quite frightened.  His fur trimmed red suit was called “Unenlightened.”  How could you not love the way Santa has had to go PC.

The Night Before Hanukkah:  Why should Christians have all the fun, here is the classic version of a night before Hanukkah.

A Gambler’s Night Before Christmas:  Since Christmas is supposed to be a day of Luck for many of the older superstitions a gambler’s Christmas somehow seems…right.

Genealogist’s Christmas: For anyone who has a passion for genealogy this Christmas poem will seem particularly sharp.

Macrobial Diseases Christmas:  Never to be outdone, bacterium also get their own special Night before Christmas

Legal Fallout from the Night before Christmas:  This nightmare of Christmas Lawyers could be more frightening than any Christmas horror tale.  Lawyers:  truly scary.

Star Trek Night Before Christmas:  Boldly going where to rooftops where no man has gone before.

An Ernest Hemingway Night Before Christmas: If you have ever read Hemingway, it is likely that you may enjoy this tribute by another famous writer, James Thurber.

I would like to leave you all with wishes for a Merry Christmas.  When you are sitting around take a moment to think of the important people who ARE not at home celebrating with their families but are out keeping you safe, healthy and protected.  Thanks to the Military, Medical Personal, Police and Firemen who work hard through the holidays to keep us all safe.

14 thoughts on “Christmas Stories,Talking Cats and Jumping the Shark”