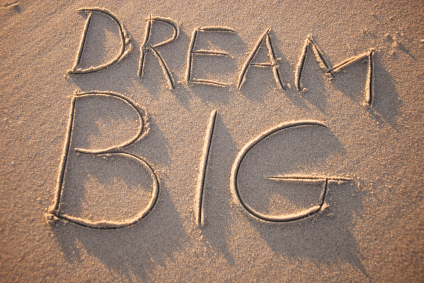 First things first—Happy New Year! If you’re like most people out there, you’ve got a few resolutions in mind for 2011. Things you’re finally going to do once and for all or things you’re going to stop doing once and for all. Whatever it is you’re planning, my advice to you is break out a pad and pen and start writing those resolutions down. Until you get your ideas down on paper, they’re not goals—they’re wishes. Most wishes do nothing more than float around in the air without ever being granted.

Speaking of goals and wishes, today I’m going to discuss dreamlining. The principle is explained in depth by Tim Ferriss in his book The Four Hour Work Week, but—lucky for you!— I’m going to give everyone an abbreviated version of dreamlining right here and now. In short, dreamlining is the best method I’ve found to record everything I want to have, want to be and want to do in the next six to twelve months. I actually got the original idea for my mini-retirement trip to Europe as a result of dreamlining. It’s a method that helps people define their goals and prioritize them. It’s a way to help you obtain the results you desire out of life. To get going, you’ll need to ask yourself:

Now for the hard part. You have to come up with answers to these questions for the next six months and the next twelve months.

When we’re kids, we think that we can do anything or be anything as long as we put our minds to it. Sadly, most of us lose that mindset as we grow older. While you’re dreamlining, get out of your mind’s comfort zone. Forget about thinking realistically for once (that you want to buy a couple of movies in the next 6 months) and think big (that you want to buy the latest and greatest jumbo flat screen TV to watch Blu-Rays on in the next 6 months.)

I’ve found that the easiest way to keep track of things while dreamlining is to create a chart. It can be as fancy as you’d like it to be. Create a spreadsheet on your computer or draw three columns on a piece of paper, jot down your 6-month answers on one side of the page and your 12-month answers on the other side. Once these goals are written down, you can start working on ways to achieve them. Start making plans! (Yes, it really is possible to save up enough money to buy a great new TV in six months. You’d be amazed at the things you can cut out of your budget if you get creative.)

So before I leave you today, remember this. If I hadn’t told myself to think big while I was dreamlining, I wouldn’t have had the chance to travel through Europe, see some spectacular sights and meet a ton of great people. A few people in my life thought I was nuts when I initially started making my European plans, but they were envious—almost spiteful—when I got home and described all the great experiences I had. Hey, maybe I should have recommended dreamlining!

28 thoughts on “Quick and Easy Explanation of Dreamlining”