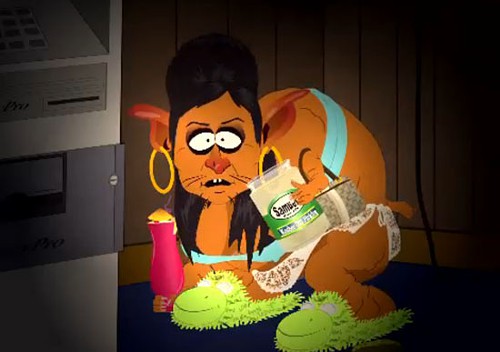 Another Sunday, another list.  I get that feeling of Déjà vu all over again.  Except now it IS different.  I am not waking up next to Slaad and Vieter (the techno twins) in a Hostel.  I am back in New Jersey;  the land of Milk and Honey and the home of the Jersey Devil.  No, I am not talking tall red cloven-hooved monster that stalks the Pine Barrens.  I am talking about the short red cloven-hooved monster who stalks closer to the area I live:  The Jersey Shore.  Eeeek!

The other day I spoke about how people can sometimes use the excuse that they do not have enough money as a reason to not start an online business.  Jennifer’s article about Cars vs. Debt was one I liked for pair of reasons.  The first is that I am currently in the process of getting a car (along with a place to live) and the second goes back to the article I spoke of.  How can people claim inability to afford the small costs of starting an online business when nothing constrains them from purchasing a brand new car and getting a crushing loan. What can I say… I am a sucker for inspirational quotes.  Onibalushi has some really great ones.  101 great quotes in fact.  I noted quite a few to try to find one specific one that “spoke” to me today.  I finally came to one from a guy who understood online Social Networking’s potential effect on business LONG before there was an “online”: Dale Carnegie.

“You can close more business in two months by becoming interested in other people than you can in two years by trying to get people interested in you.”  Great words.

If you are interested in Niche Websites (which I am) then you may well be interesting in a challenge going on between two friends of the Steve Scott Site.  Yes, in case you didn’t know, Alex called Moon out for a Niche site duel.  They are both currently busy on what I think is THE MOST ESSENTIAL part of making a niche site:  Research.

Here is Alex laying out the Niche Site he is building and his thinking on the topic.  In reply, here is Moon getting down and dirty with Keyphrase Research.

Speaking of Moon; don’t forget that tomorrow she releases her first FREE!! eBook.

I was lucky enough to get an advance copy that I read yesterday.  It covers a lot of the things she has learned in the past few months.  From making a blog work to all sorts of goodies on things NOT to do for a niche site.

Anyone new and starting out must get a copy of this to save you from making some mistakes that will just cost time and energy.

Since there is no active link yet.  Go to http://experimentsinpassiveincome.com/ Monday morning and I am sure it won’t be hard to find.

Tristan has a really good in depth review on the power of analogies.  He shows how to make and use some great ones and the way that this can be used to make some really excellent ones.  How about these analogies Tristan?

“She had a deep, throaty, genuine laugh, like that sound a dog makes just
before it throws up.”

“Her artistic sense was exquisitely refined, like someone who can tell
Butter from I Can’t Believe It’s Not Butter”

“He was deeply in love. When she spoke, he thought he heard bells, as if she
were a garbage truck backing up.”

“She walked into my office like a centipede with 98 missing legs.”

“He was as lame as a duck. Not the metaphorical lame duck, either, but a
real duck that was actually lame. Maybe from stepping on a land mine or
something.”

Seriously, though, Tristan’s analogies are good ones. He also shows the way to MAKE good ones.  Unlike the above that are so BAD they are GOOD.

Most people know about and utilize article marketing for some backlinks to their blog.  A lot fewer people take the time to submit their blog to directories.  I will admit that I have been a little bit lax on doing this myself.

These directories are really a great way to build some more links.  Mike has made a really epic post that it just about the final word on article directories.

Murray should call his monthly post over Big Red Tomato Company. “All you need to know, but were afraid to ask”  Once again he delivers a mammoth post that cover every aspect.   I had to count:  3,675 words.  Basically it is a short info product.  Just as packed with information too.   Not full of fluff and filler like you often find but very specific and actionable steps.

If you ever had/have or even foresee a day in the murky future where you might ever think about doing ANYTHING with eCommerce, it is just about imperative that you head on over and check out this guest post on eCommerce.

A Passive Income is a goal for many people, as I discussed earlier this week.  Well of course since this is such an important topic, I was not the only one discussing it this week.  Bryan also has really good article on methods of Passive Income Generation that everyone should really check out.

I have talked extensively in the past about how to get a lot of daily visitors from Twitter.  I stand by those methods and I still see a daily increase in my followers (over 10k now).  But it is a “brute force” method, and I will admit that many of those 10k are not worth nearly as much as the 100+ that are really active and engaged.

As most of you probably know building an engaged following is just as important as building a “Large” following.  Over the next few months I desire to raise my engaged followers the same way I have my “numbers”.  How do you do this, well getting on Twitter and socializing more is the best.  Which I will attempt to do more of; but these Twitter Strategies by Dino also show some great ways to find and recruit more followers who are likely to be “engaged”.

Most successful people have to overcome a lot of opposition to “make it”.   This is true in business and it is true in many other forms of careers.  Certainly one of the single most successful comedians of the past 20 years has been Jerry Seinfeld.  Ryan discusses some things you may not know about Seinfeld That link directly to the subject of success.