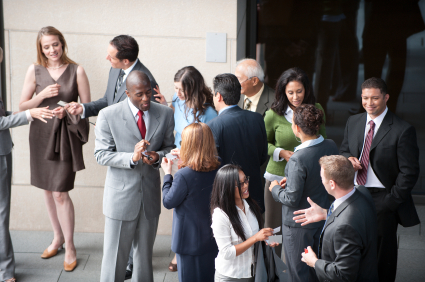 It was once considered a method to increase your client base, but business networking is actually much more than that. It’s also a great way to gather information, meet new people, and develop your own skills—among other things! Even self-employed entrepreneurs who work from home can benefit from the advantages of networking. When you go to networking parties, which are often called “events,” or “meetups,” you’re going to learn something from somebody.

Whether it’s the inside tip that a major company in your area is looking for new hires or the fact that Google AdWords has coupon codes inside the latest edition of a certain magazine, you’ll learn something. Every bit of extra knowledge you can scoop up is beneficial.

The more people you know, the more connections you have, which is why you really can expand your client base with business networking. In order to do so, though, you’re going to have to talk to others. Just showing up isn’t going to help you out much– you’re there to network, remember?

Even though networking parties can be pretty crowded, they’re usually just comprised of a lot of small groups of people that are chitchatting among each other. If you’re relatively shy, make it a goal to approach at least two people per event. They’ll probably even introduce you to someone else, and that will get the ball rolling.

Develop Skills You Didn’t Know You Had

Discussing what you do for a living with people at parties and events is also an advantage of networking because it gives you the ability to practice your “spiel.”

Even if it’s just going through the motions, explaining what services you offer, offering pros and cons of certain aspects of your industry, and letting people know how they can reach you should they decide they need some assistance are all good ways to practice doing it with real potential customers. (That’s not to say people at these events can’t become customers, too, but they’re probably not going to be as judgmental.)

Once upon a time, joining your local Chamber of Commerce or becoming a member of the Rotary Club were two of the few options out there for making business contacts. Don’t scoff at joining those organizations; just realize that there are lots of alternate ways to meet up with others out there. Speaking of meeting up with others, the website Meetup.com is a good place to find various groups in your area that can you experience the advantages of networking.

17 thoughts on “There Really are Advantages to Networking!”