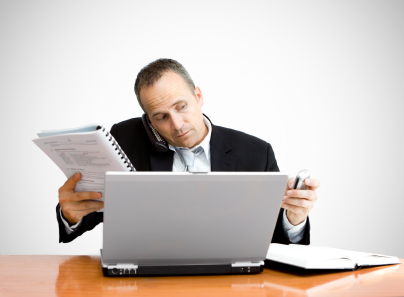 We’ve all become so accustomed to doing two or three things at once that it’s not unusual to see a person sitting in a coffee shop with a laptop open in front of them, a muffin in one hand and a cup of coffee in the other … all while they’re talking into the cell phone that’s propped between their chin and their shoulder. Doing Four Things at Once Has Become “the Norm” at Work

It’s easy to feel like you’re being pulled in every different direction or that you’re wearing six different hats at once, whether at work or in your personal life. It can get pretty overwhelming and in order to get everything done, we usually turn to multitasking—doing more than one thing at a time. Multitasking can also be defined as moving back and forth between different tasks—doing a little bit here and a little bit there in hopes of finishing multiple projects at once.

Budget cuts at the office mean that less people are covering more of the work, and even though it sounds extremely appealing to people who’ve never done it before, working from home usually involves putting in more hours than you ever did at the office. That leads to even more multitasking. Smart phones make it really tempting to check email or send text messages throughout the day, even while you’re eating dinner with a friend or hanging out with your kids.

If your time management strategies involve trying to get as much “bang for your buck” by working on four or five projects throughout the day in hopes of finishing all of them, you’re not alone. We’ve all been guilty of multitasking. I’m not even sure if guilty is the right word, because in some cases multitasking is probably beneficial. I aim to post one piece per day on this blog, and sometimes I’ve started three of them and go back and forth between all three as I come up with more ideas and finish all three.

On the other hand, concentrating on one thing at a time—singletasking?—would probably force you to concentrate on doing your best and giving your all, wrapping up one successful project before moving on to the next.

Maybe it would just leave you worrying about everything else on your to-do list.

What are Your Time Management Strategies?

I don’t see anything wrong with multitasking during leisure time, such as flipping through a magazine while the TV is on, but constantly checking text messages from one friend while I’m hanging out with another one is downright rude. When it comes to work, sometimes it’s a different story. If your boss needs this, this, and this done yesterday you probably have to work on things a little bit here and a little bit there to get them all done, but I know that personally, I feel rushed when I’m trying to get a lot of things done simultaneously.

That said, I’m not totally sure if multitasking is worth it.

So my question is: works for you? Multitasking or finishing one thing before moving on to the next? Maybe you can even offer up some pros and cons of each and why you’ve chosen one over the other. Let’s help each other out with our time management strategies!

23 thoughts on “Time Management Strategies: Is Multitasking Worth It?”