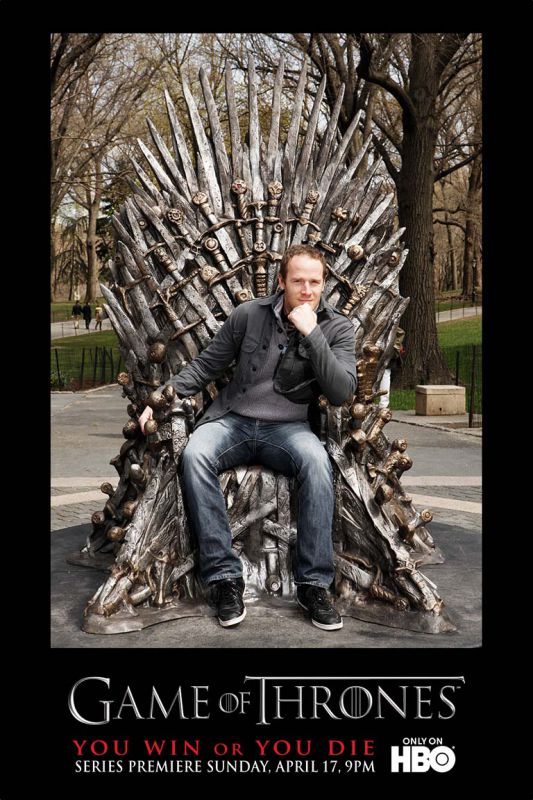 I have a secret.

I took an hour plus train-ride into NYC yesterday.  Then, I walked from Penn. Station to Columbus circle.  Just so that I could get this picture you see with me sitting on the “Iron Throne”.

I am an avid reader of a lot genre of books.  One type that I particularly enjoy is fantasy.  Specifically the writing of George RR Martin, who wrote the series that the new HBO television series, “Game of Thrones” is based on.

Like any real nerdy fan-boy my love for this specific series of books may go beyond normal appreciation into a near obsession.  I had been thinking about making my next trip around July 10th, then realized the next book in the series (which, in my defense, I have been waiting nearly 5 years for) comes out on the 12th, so traveling before I read that would be an impossibility.

I simply wouldn’t enjoy it knowing I could be reading the book.

What you can learn from being a nerd.

The whole point of this article is not to tell you how much of a nerd I can be.

I do have a point relating to internet marketing.

So here is the story.  My brother and I (my brother, a far more “rabid” reader than I am, also ranks the Game of Thrones books as his #1) Finally get to Columbus circle.  We had expected to take our own pictures, but they had a professional photographer set up.

The process went like this.  You sat down on the “throne,” had your picture taken, they quickly loaded the picture onto one of 5 IPADS they had ready.  You pick your picture, enter your email and “bam” send it to yourself.

As we were walking away, my brother said, “What a remarkable method of email capture.”

Now, I make my living marketing and emails and email captures have always been my “thing”.  Anyone who has read this site for any significant amount of time will certainly remember me going on, “Ad Nauseam”, about the important of list building and email marketing.

But I didn’t even realize it had been an email capture.  -Not that it bugged me-   In fact it was brilliant.  HBO built their list of people who may be interested in memorabilia, and branded stuff.  They may have swayed people into giving the show a chance.  For the thousands of “rabid” fans like me who may have visited these “photo” sites across the country they get more than that.  I cannot imagine how many people, in addition to myself, posted pictures like this (branded with both HBO and Game of thrones information and logo) on their websites and Facebook pages.

Thinking outside of the box

None of us may be able to swing a budget like HBO did to promote their show.  But that doesn’t mean we shouldn’t try on a smaller scale.

Now picture yourself outside of it. Got it?

That is how you need to think.  Thinking outside of the box is not always easy.  If it were easy, everyone would do it, right?

Now let’s think for a second how you could take my nerd lesson and use it for your gain.  It could work wonderfully for a local event.  Offer a free give away.  A free drawing.  Or even pictures mailed directly to emails like the one I had.

These people will not be “on your list” yet, because they will not have gone through double opt-ins that most good auto-responders require.  But you know what interests them and you have given them nice goods for free.  It should not be a difficult stretch to convert these potential customers.

Let’s get specific with our out of the box thinking.  Understand this is all just theoretical too, I have not really looked into the cost/gains of this idea or the feasibility.  There is a TON of work to be done in pulling this type of thing off.

Let’s look a Gabi’s website, someone who fits the bill for the passion I will discuss later.  She has a love of running that I share.  What could she do in the “real” world to gain more subscribers/readers? … Many things.

The easiest would be to contact the organizers of local 5k or 10k races and see what they allow.  -There may be fees involved with even in giving away free stuff, it is wise to always investigate first.

Then she could try the same “pictures-method” as people cross the finish line.  OR- She could give away free keychain’s or pens to all finishers with her website logo clearly branded on the side.  All of the “old school” marketing techniques to get people to visit a new age blog.

Of course all of these methods do take money and effort to get them going.  There certainly needs to be a cost/benefit analysis done.  But trying other ways to drum up people for your site can work.

I play poker sometimes.  Once in Atlantic City I saw a guy sitting across from me who had a shirt that said, “Ask me about my website:  A-1poker.com” (or something like that…I forget).

Sure enough I asked and he told.  And 8 other people at the table heard too.  Now that is not a ton, but with going to a few different tables a day; doing something he was going to do anyway…he might have gotten few people to visit his site (I know I did) just from wearing a T-Shirt.

Now if he also had business cards and a small baggie of give-away’s he could have perhaps done even better.

I am all for typical free offer eBook leading to email marketing, but if you can strengthen that with some other methods, it is even better.

Remember:  Think of the box and think of yourself outside it.  That’s the nerd way!

The Importance of Passion:

Passion is one of those strange terms.  It has been so over-used in relation to your online success that it has begun to lose meaning.

Regardless of all of those detractors for using the word, I still think passion is important.  If you work on something online for hours and hours you should enjoy it more often than not. Following the identifiers of passion that Steven points out I am absolutely passionate about the Game of Throne series, both the upcoming TV show and the books .  But there is not really any money to be made writing about that passion, so I don’t.

But I do enjoy the things that I write about.  They are subjects that I could spend a lot of time talking and writing about.  Perhaps I am not as, “geeky” and “passionate” about things like landing page design (thanks Bryan), email marketing and SEO as I am about fantasy and the like, but it is something that I still could talk about for ages, and really enjoy discussing and learning about.  Is that passion?  I think so.  But even if you would not call it “passion” it is at least, “strong like”.

“Strong Like” is at least the minimum threshold for any single topic you will be writing about for a long time.

When it comes to finding something to write about online it needs to be something you could talk, and write about A LOT.  Call this “passion”.  Call it a “interest” in the topic.  The term is just semantics.  The important part is that the topic really can get you flowing.

Most of my readers are probably familiar with Patricia and her passion for lavender, as seen in her recent article on Lavender brews.  Is she really “passionate” about lavender.  Not knowing her personally, I would say yes.  But even if she is not passionate she has more than enough of a deep connection and caring for the product to.

Let’s take a flip side of this coin.  Perhaps you know Alex Whalley just completed a 30 day article marketing challenge.  The idea was to make a niche website.  Write one heck of a lot of articles about it and see how they did using UAW (Unique Article Wizard) as the only back-linking source.  I will let you read his article to see the results.

In fact the first line of his article reads, “I hate drills”

While he wrote a lot about drills in 30 days for the challenge, he didn’t make his own “personal goal” of how many he was going to write.  You can do a certain amount of writing on a subject you detest by willpower alone, but it is not a long term solution.  If Alex had to make a career writing about nothing but drills for the next 3 years, I have no doubt he would eventually fail.  Likely ending it by putting the drill to his head like the classic scene from “Scanners.”

In the long term, you need passion.  Passion can sometimes be the geek inside you.  I know I am talking about the “right topics” when I get someone cornered who is not really interested in the topic and I talk about it so much I see their eyes glazing over just a little bit.

Embrace the power of the nerd. Embrace your inner passions for your subjects and niche.

What you can learn from being a nerd? A lot I think.

OK, now it is time to let, “my” nerd loose.  So watch out.  For everyone with HBO, I hope you give Game of Thrones a chance (HBO- Sunday 17 Apr 9PM EST).  Personally I just “got” HBO just because of this series.  If you do not have HBO and you are a reader, I hope you give the series of books a chance.  (not to condone it…but some people have been known to download bit-torrents of some of these great HBO shows the next day…  Bad-bad people)

Anyway check out this clip.  It has a couple seconds, “trailer” and a solid 14 minute clip from the first 1/4 of the first episode.  (Basically a mixing of the prologue and the first chapter from the book)

You do not need to be a big fantasy nerd like myself to enjoy Game of Thrones.  Unlike Lord of the Rings.  The “magic” and fantasy is kept to a bare minimum.  In fact the little “intro” piece you see in the above clip, “north of the wall” is really the only “magic” I remember from the first book (it was the “prologue” chapter).

Unlike LOTR this is a series much more based on the characters.  The characterizations are absolutely top notch and it is WAY too involved to ever possibly make a good movie.  In fact, 15+ years ago, when I first read this book, I remember thinking the ONLY way this could ever be made and not become a complete, “horror” was to be done on HBO.

But I will not bore you any more with my nerdy habits.  It just so happens my brother also loves these and has made a few Squidoo lenses about this series when he was bored.

If you want more info check out

Cast and characters of Game of Thrones –  It has a collection of many of the “major” characters video snippets.

Game of Thrones HBO for a general review of the story (I think he plans on updating as the series progresses.)

Hopefully I can “nerd talk” with any of you about the show after tomorrow night.

Regardless of your interest in this topic though I hope you will all consider the importance of passion and thinking outside of the box for your own successful endeavors?  Remember you can learn a lot from sometimes being a nerd!

Even though we are fully into spring…. Remember

35 thoughts on “What you can learn about succeeding online from being a nerd.”